I work in an area of mathematics called number theory, and in particular on Fibonacci numbers and polynomials. I also study other topics from both number theory and abstract algebra (on sequences, groups, algebraic extensions, etc). Here are some of the articles I have written, with the most recent ones on top. I’m quite proud that some of my co-authors are students, both undergraduates from here at W&L and also high-school students from Pioneer Academics.

Thanks to my joint articles, I have an Erdös number of 3. This means that I’m only three co-authors away from Paul Erdös, the most prolific mathematician in history (biographical links to Wikipedia here and to the MacTutor history of mathematics site here). The MathSciNet database used to give the chain as Dresden — Art Benjamin (at Harvey Mudd) — Phyllis Chinn (at Humboldt State) — Paul Erdös, but sometimes it replaces Phyllis Chin with Paul Chartrand (Western Michigan), who co-authored with Art Benjamin and with Paul Erdös. (Some famous people with Erdös number 3 include Larry Page, Sergey Brin, Kurt Gödel, and John von Neumann.)

According to my Author Page on the math indexing site http://www.ams.org/mathscinet/, I have over 100 citations (that’s where someone referenced one of my publications in their own article). It’s not as high as the citation counts for some of my colleagues, but on the other hand it’s nice to know that people are actually reading and referencing my articles!

Some of my articles have also been referenced in books. For example, my two papers on the last non-zero digits of various sequences are quoted in Note 1.8.10 of the book, “Numbers and Functions: From a classical-experimental mathematician’s point of view” by Victor H. Moll of Tulane University, as seen here. (Note that I’ve actually proved that these are transcendental numbers and not just irrational numbers.) 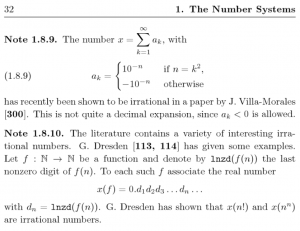 I’ve given many presentations on mathematics at local and national conferences. Also, Art Benjamin (mentioned above) gave a presentation on our joint work at MIT in December of 2004. Recently, I gave a talk at JMU on the Mahler measure and again on the Look-and-Say sequence, and a student of mine gave a talk at Loyola (in Maryland) on her senior honors thesis on factor rings.

Over the years, I’ve submitted a number of original problems to math magazines. One recent problem was on finding the shaded areas of special kinds of polar-coordinate graphs; shown here are the graphs for r=sin(4 theta/3) and r=sin(6 theta/5). The answer was both simple and surprising.

This appeared in print as problem #1221 in the March, 2022 issue of the College Math Journal.